I am currently working as a Senior Front-End Developer at RED Interactive Agency.

These are the websites I have built for RED. 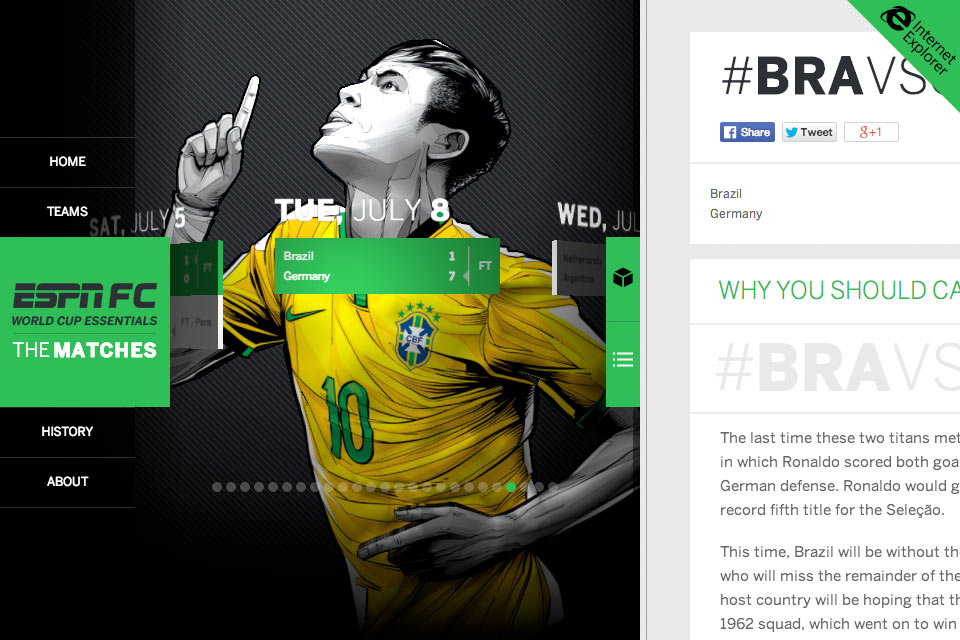 We built this site for ESPN to help people unfamiliar with the World Cup get up to speed.

The site is built with Ember.js using modular components and a responsive layout. CSS transitions and animations are used when navigating between pages. It is backed by a Django REST API for up to date match scores. The end result is a snappy and stimulating user experience supporting all modern browsers and devices. 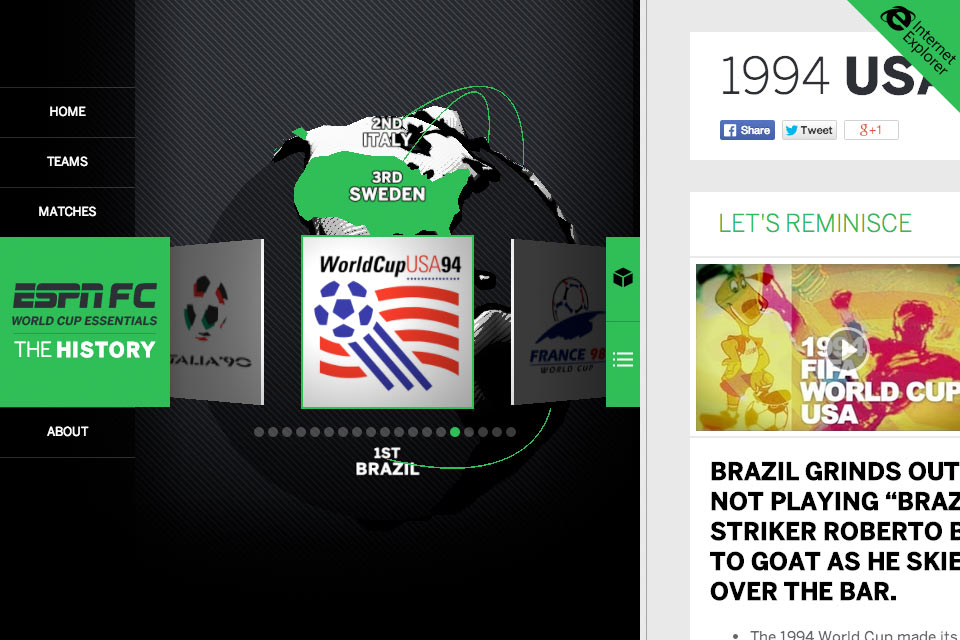 The site uses Three.js to render the WebGL navigation. To render the team names, match scores, and days in WebGL, we draw the text onto a 2D canvas and then use that canvas as a texture in WebGL. We use Ember’s data binding to keep the 2D canvases in sync with the rest of the site.

I was one of two front-end developers who built this site. I was focused mostly on the WebGL navigation and responsive navigation collapsing.

Visit the site at worldcupessentials.ff0000.com.

Awards: FWA Site of the Day, CommArts Webpick of the Day 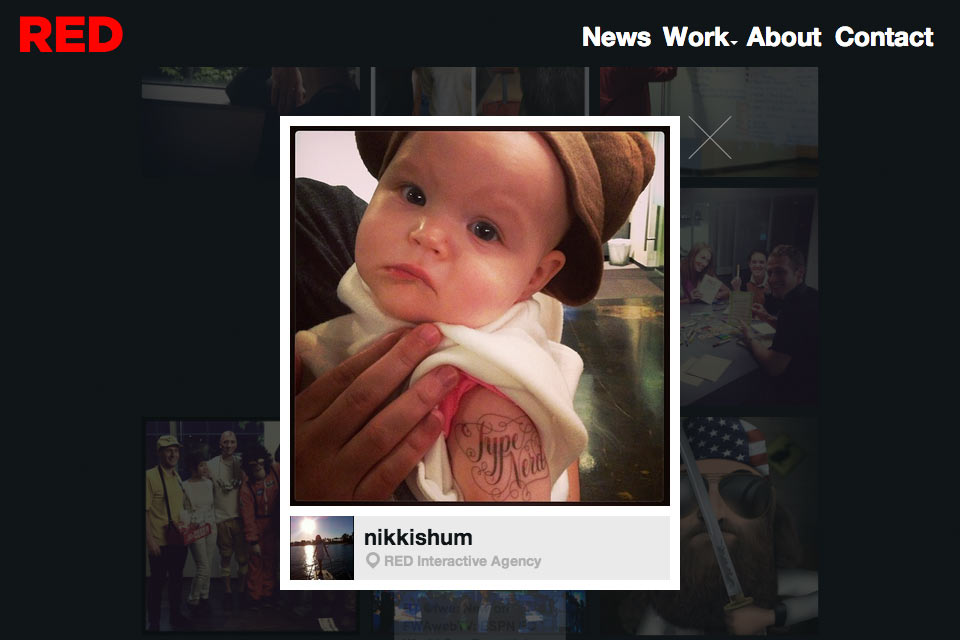 After the front-end team at RED switched to Ember as the framework of choice, I worked on converting the company’s website to Ember. Because a lot of the css had already been written, I was able to completely rewrite the JavaScript and Handlebars templates in 3 weeks.

I was the sole front-end developer who worked on the Ember rewrite. 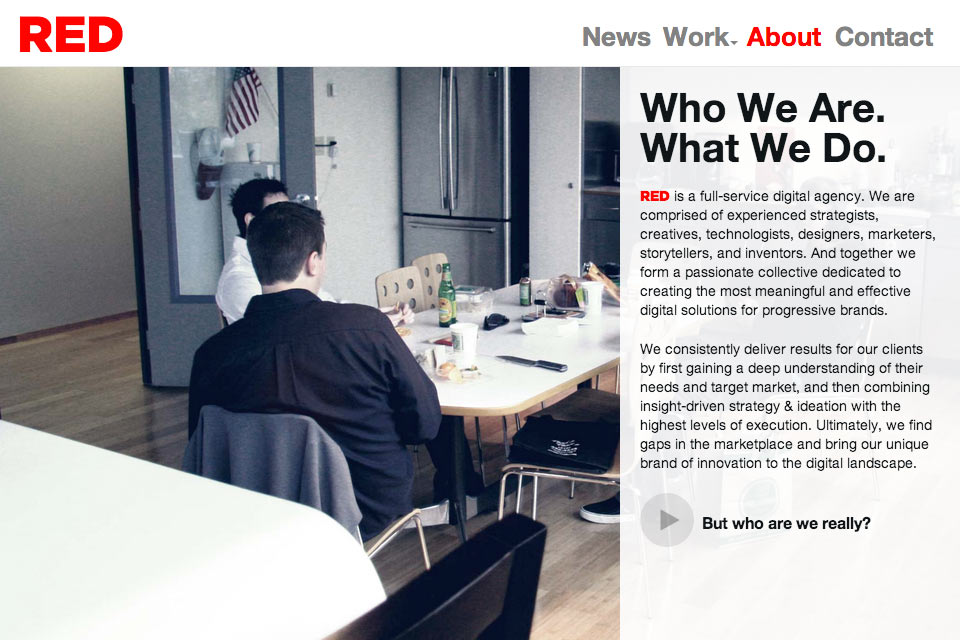 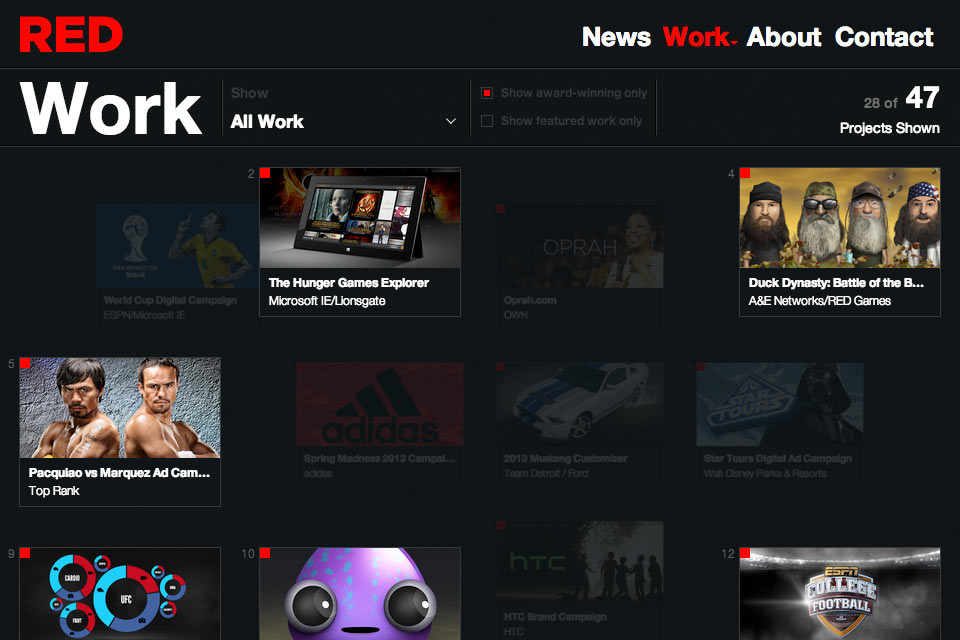 Because this is a much longer lived site than some of the other campaign sites we built for clients, I wrote a full suite of integration tests for ensuring that the front-end UI continued to work as expected when releasing updates. 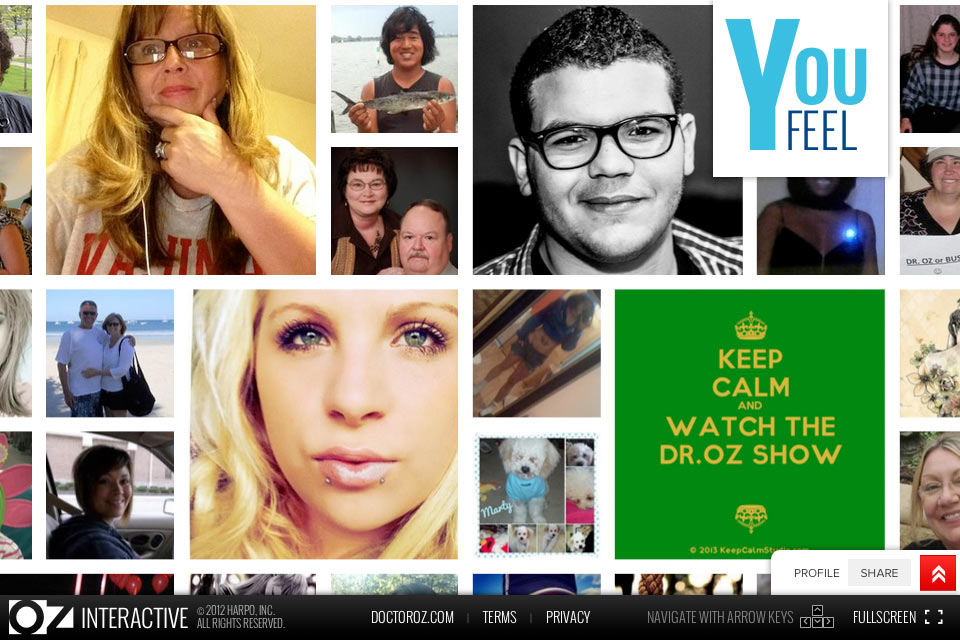 We built this site for a segment on the Doctor OZ show. Users were encouraged to upload a photo or video and tell everyone how they were feeling.

The site is laid out on an infinite grid scrolling in every direction. I developed a solution to allow a finite number of photos to cover an infinite grid. As the user scrolls through the grid, each empty space is filled with a photo from a queue. As the queue is emptied, we continue to fill it with more photos from the server, eventually looping back through to the beginning of the queue.

We also integrated with Facebook and Instagram to allow users to select one of their photos to upload.

I was the sole front-end developer who built this site.

Visit the site at you.doctoroz.com. 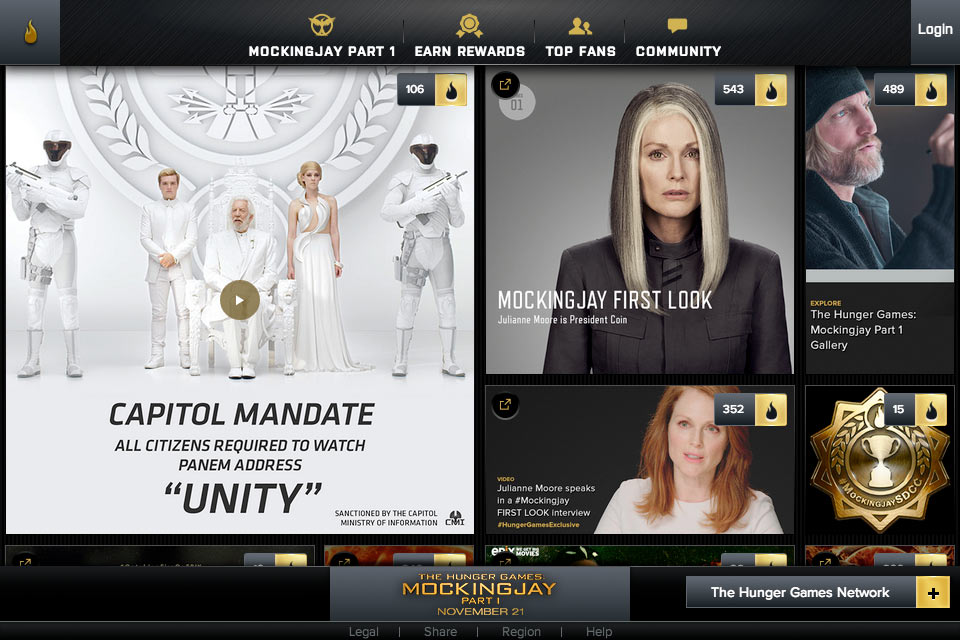 We worked with Microsoft Internet Explorer’s team and Lionsgate to create this site as a portal for the Hunger Games franchise. 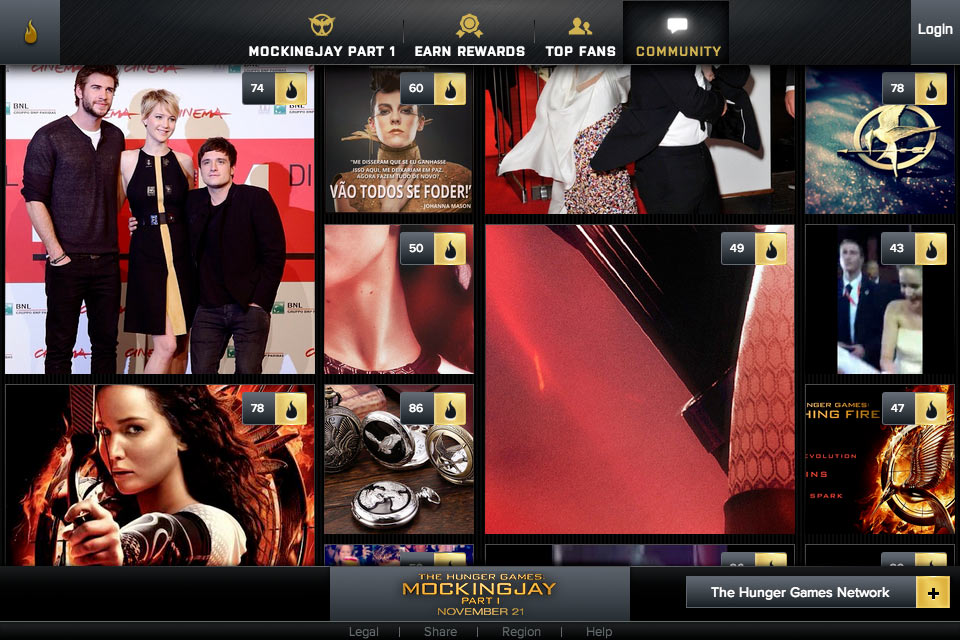 One of the challenges we faced was building the grid of user generated content in a tightly packed layout.

I wrote an efficient grid packing algorithm to stream in content. You can see a simplified example on codepen and an even faster version used in the RED Canvas Logo experiment.

I worked with a team of 4 front-end developers to build this site.

Visit the site at thehungergamesexplorer.com. 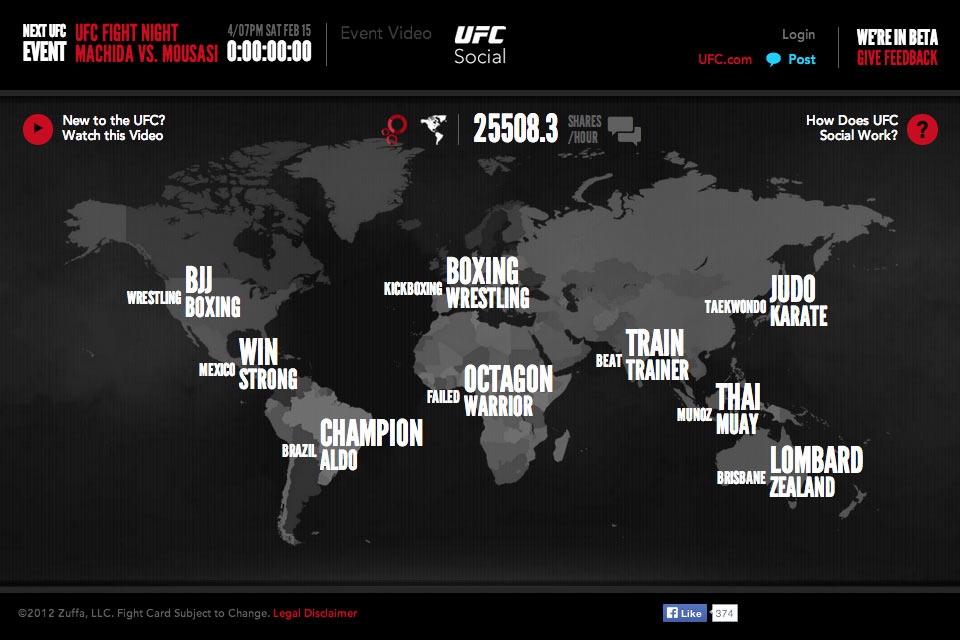 UFC Social is a real-time platform that features the top-trending UFC content from around the web. The home page features a unique visualizer for trending topics; the bigger the circle, the more content you’ll find on that topic.

There is also a “map” view that showcases the most popular topics in every region of the world. Within each topic you’ll find related articles, images, and videos.

Once you start exploring, you can share any piece of content with your friends, give a thumbs up to what interests you the most, view the upcoming UFC fight card, watch event videos and more. 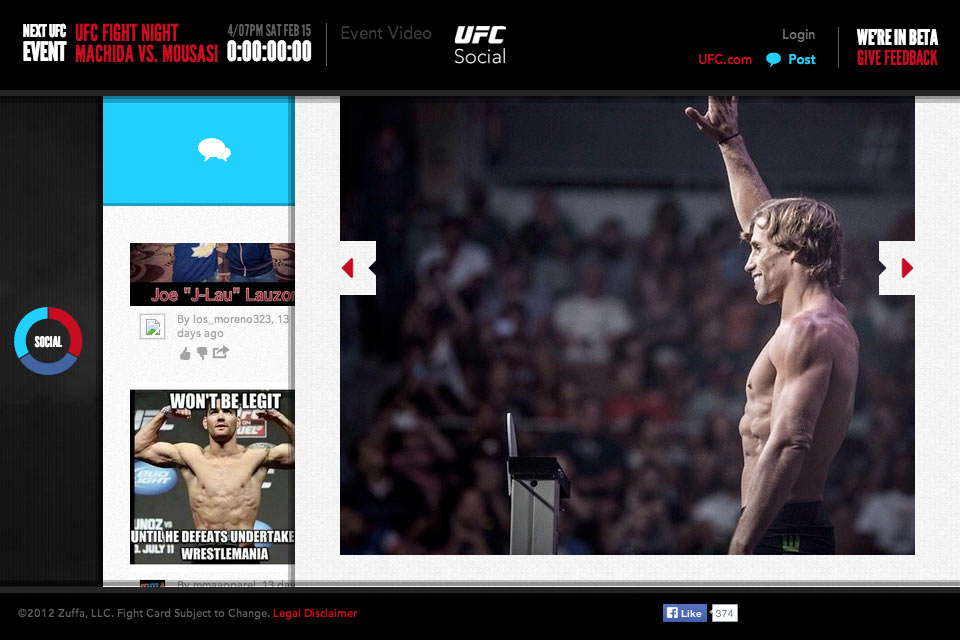 The site was designed with nested panels that open the deeper you navigate.

I built a JavaScript router that would rehydrate the stack of panels no matter how you arrived there, whether by clicking an internal link, or by following a link on twitter, or by clicking the back button.

The challenge was building an interface that behaved like a native tablet app, but had full url support.

I worked with one other front-end developer to build this site.

Visit the site at social.ufc.com. 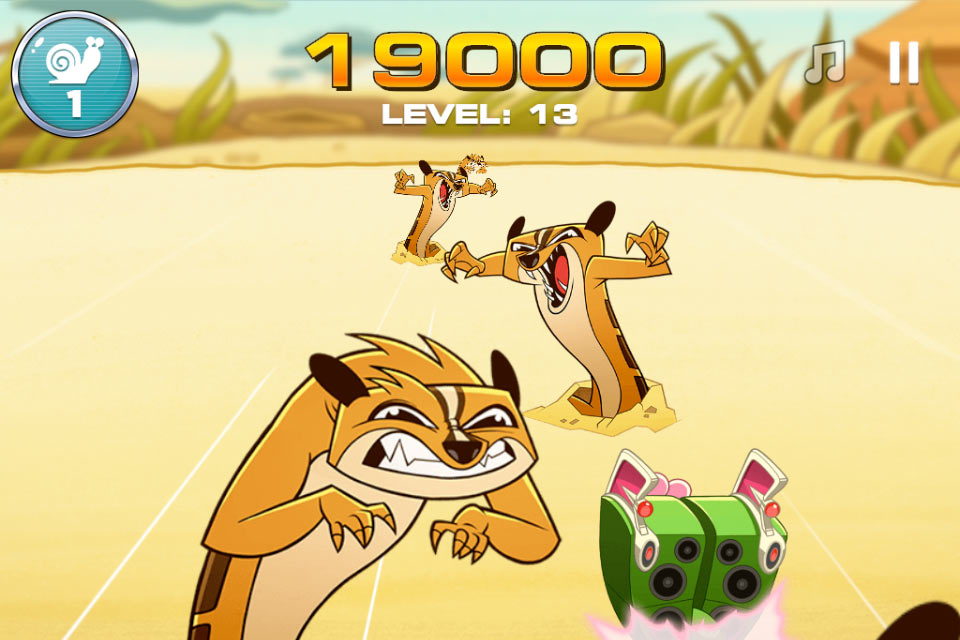 We had a 2 week turnaround time to develop this game. I built this with one other front-end developer.

We used Ember.js for managing navigation between all the screens in the app. The game engine uses a lightweight component-entity framework I built for structure. I wrote the subsystems for the rendering loop, scene graph, collision detection, and spring dynamics.

Visit the site at savannah.teamturbofast.com.